Army veteran Paul Colling lost the life and the job he loved after a traumatic leg injury left him in near-constant pain. The former Corporal in the Royal Signals was medically discharged after serving 16 years and says that the charity is one of the main reasons he’s still here today.

He knew from a young age that his goal was to follow in his brother’s footsteps and serve. As a physical trainer in the Signals, sports-loving Paul regularly took part in endurance marches and fitness training.

But an injury sustained early on in his career was to have enduring consequences; Paul sustained a traumatic ankle injury, damaging the ligaments, tendons and cartilage during a training exercise.

Despite his injury causing him frequent bouts of pain, Paul went on to have a successful career training recruits. But in 2017 his career came to a sudden end; another training exercise had caused more damage, as Paul explains

“They scanned my leg, and I was told I had to leave. It was like my world ended. Who you are, everything you’ve worked for, everything you wanted to achieve just gone."

I think that was the first time I’ve ever been mentally broken. It snapped me.”

On the surface, Paul seemed to manage the transition into civilian life fairly seamlessly. He found a new job with a waste management company that created stability and his employers were understanding when operations for his injury were needed.

But the soldier inside was at war with his new path, and Paul struggled mentally with the sudden loss of his military identity. Twice, he reached the point where he considered ending his own life.

“Every soldier is taught to crack on and show they’re alright, so I didn’t really acknowledge my declining mental state at first."

Looking back now I felt lost, confused and alone. Struggling with the acceptance that you’re not who you wanted to be, that everything you fought for, is hard.” 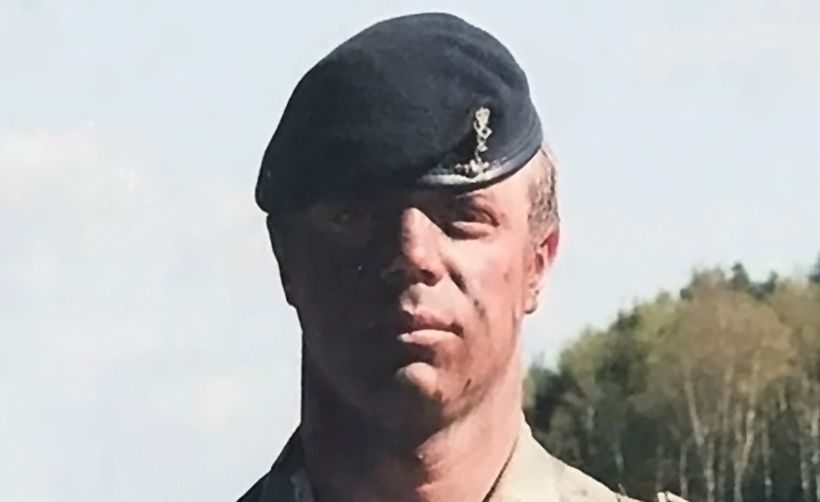 Paul Colling in his military uniform

Paul says “The course helped me accept that I probably wasn’t 100% mentally where I thought I was. It made me see life from a different perspective and it’s also helped me help others along the way.

I‘m also a member of the Band of Brothers fellowship which is great because it brings everyone together – it doesn’t matter what a person’s battle is or what they’re going through, you’re all helping each other.”

Now, Paul’s career is thriving and having made progress in his own recovery, he even volunteers for us to raise awareness of the continuing need for veterans’ support.

“It really is lifechanging what the public do to raise the funds, they do an amazing job."

There are 40,000 other people out there who might be going through the same battles I did – struggling mentally or physically.”

This year, Paul is taking part in the annual Cenotaph march as part of a contingent of veterans from the charity. Here, Paul gives his thoughts on Remembrance.

“To me, Remembrance is a time to reflect on what sacrifices have been made for our today. It’s a time I put all today's problems away. Forget about my problems such as pain and mobility issues, forget about the little things in life that gets to us which in the bigger picture shouldn't really get to us.”

Paul was deployed to Iraq in May 2004 and did a tour of Afghanistan in 2006 as part of Operation Herrick 3.

“I was young when I served both tours. There are parts of Afghanistan that stick with me still, but the bit that reminisces with me the most was the repatriation parades standing by the Hercules as the coffins of our fellow soldiers were loaded on and sent home to rest with the Union Jack laid over the coffins.

That is what will stay with me, knowing the families that have been ripped apart.”

“Ever since I can remember, Remembrance Day has been a part of my life. Over the years I have spent it remembering in many ways, from on military parades, race of Remembrance, in the pub with friends, at home alone, online with an online community through Covid to marching with Help for Heroes.

“Help for Heroes has had a huge impact on my life. The charity is one of the main reasons I'm still here and carrying on with life. They have helped so many people who have been directly affected from their time in the forces."

Suicide is far too common and Help for Heroes give people a second chance at life. To be able to march and represent a charity who makes such a difference is an honour, its hard to put it into words but it's a very powerful way to remember together.”